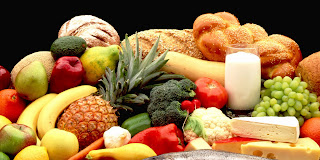 We want to learn to express the idea of giving objects TO someone. Of course, we use the activity to strengthen old vocabulary--animals, words for family members, and pronouns.
It is important to use old vocabulary for another reason. By using familiar vocabulary, everything the GP hears will be relatively easy to understand, except for the details that indicate who is the recipient (and the two new actions). This is another case of learning grammar without necessarily thinking of it as grammar, but rather thinking of it as the way to express a concrete meaning. A basic principle in activities that introduce aspects of grammar is to use vocabulary that is familiar so that the only new thing is the grammar form or pattern.

The Nurturer gives instructions to the GPs of the form, "Give a large red candy to the horse; Give a small green candy to the dog..."
Be sure to include any animals that the GPs so far remember only weakly, along with some of the ones they remember most strongly.
Coloured candies work nicely in this activity, especially if you have small and large ones.  Spread out a number of the toy animals (or animal drawings).
Other options are buttons, flat beads, or coloured paper clips in two sizes.

1X:
With puppets: To first demonstrate the actions, “give” and “take”, the nurturer can use her puppet assistant. She says to the puppet. “Take the red candy.” “Give the red candy to the dog.” She can continue to give several instructions to the puppet until she feels that the GP is ready to follow instructions.
Needed: Puppets or stuffed animals

Now the GPs each take some of the animals. The Nurturer says things like Give a small yellow candy to my cat. Give a big brown candy to his cow…

Continue giving candies to the animals, but now also to "the girl’s mother, the woman's younger sister," etc. Animals and family members (as represented by the doll family) should be randomly interspersed with one another: "Give the dog a candy. Give the   girl’s younger brother a candy." Etc.
Needed: Set up the doll family again.

Add other actions in addition to giving that may use the same forms or patterns of words: "Throw me a candy. Show the horse a small brown candy."

The Nurturer tells GPs, "Drink some milk. Drink some water..." As always with new vocabulary, start with two, and add one new one at a time. At some point, you can add the action "pour". And you can even try adding, "Pour me some juice. Pour the girl's big brother some juice." But be sure to mix pouring with drinking.
If you don't want to actually pour milk, water, juice, soda, tea, into glasses and cups, you can set containers of each liquid on your learning table, and set a glass or cup next to each container. Needless to say, if the language you are learning is spoken by people whose material culture is radically different (and you and your Nurturer live in that cultural setting), you will always collect the common everyday objects (e.g., what they drink out of, what they drink) rather than the ones suggested here.

The Nurturer asks questions such as: "Where is the carrot? Where is the egg? Where is the squid? The GPs try to quickly learn at least fifteen food items."
It is quite easy to collect actual food items. This is the chance to add a healthy number of new vocabulary in this session. Place on the learning table, for example, a potato, a piece of cabbage, a   fried grub, a scrap of cooked meat, butter, bread, rice, oil, flour, salt, etc. Perhaps you will want to run to the market the night before, and pick up "one of everything" so as to have many different foods on hand. Try to include the basic food items of the Nurturer’s everyday life.

8: Eating and drinking and giving and taking (TPR)