Arabs In The Bible #2: Moses Married an Arab 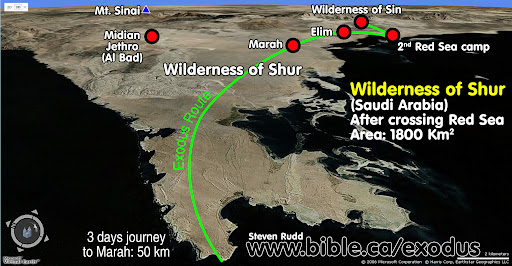 Do you remember the story of when Moses murdered an Egyptian because he was defending a fellow Jew, and buried the Egyptian corpse in the sand? Pharaoh found out and sent his bounty hunters after Moses (Exodus 2:15). Moses was wanted dead or alive by Pharaoh, King of Egypt.  Moses was forced to flee from the golden halls of Pharaoh's palace in Egypt, to the vast wasteland of the Saudi Arabian desert. (Exodus 2:11-12) Moses ends up parched, homeless, and lonely at a well near the Arabian city of Median. (Exodus 2:13). 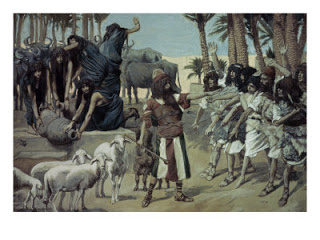 Apparently, Moses has a strong sense of justice and a terrible temper. While sitting at the well, some beautiful Arab shepherd girls (seven in all), come to water their father's flock of sheep. These girls are chased off by Arab men at the well. Moses decides he doesn't like what he sees and stands up for the shepherd girls. He even waters their flocks as an act of kindness. The only thing I can think of that would drive a man to do this is love at first sight. As fate would have it, he was helping the seven beautiful daughters of the "priest of Midian" named Reuel (רעואל) (See reference 1) (Exodus 2:18). He is a powerful and influential Arab leader in the region. God would protect and provide for his future leader Moses through his Arab servant Jethro. The scripture tells us, Jethro invites Moses into his home and over time allows Moses to marry his daughter Zipporah. They soon have a son and call him Gershom which means in the Hebrew "a foreigner there." What a beautiful story of Arab generosity, hospitality and protection. Arabs are still famous for there big hearts and acceptance of foreigners. My wife and I were both "Gershoms" in Jordan and found refuge with an Arab family.

Who is this priest of Midian-Shu'aib, Jethro, Reuel, Hobab? 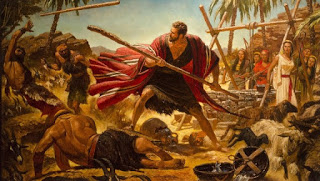 Here is what we know:
1) Jethro is a religious leader called the "priest of Midian."
2) Jethro is a Keturahite Arab through Moses's wife Keturah. She had six sons: Zimran, Jokshan, Medan, Midian, Ishbak, and Shuah. In a bid to protect Isaac, Moses sends these sons away to the east with gifts (Genesis 25:1-6). These sons become the forefathers of the Arab tribes of Saudi Arabia, Yemen, Egypt and Iraq.
3) Arab Shu'aib helps Moses set up Israel's earliest judicial system. He advises Moses to train and delegate the administration of Israel to lower judges. Moses is saved from burn-out by following the advice of his wise Arab father-in-law.

What do we know about Zipporah (צפרה)? 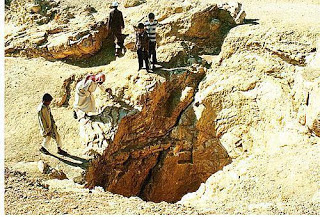 1.)Zipporah is thought to mean "beauty," "bird," or "little bird" in Hebrew. (See reference) we can deduce, Zipporah is a beautiful Arabian woman.  Moses falls in love with this Arabian girl at the well. Perhaps he is showing off a little when he comes to her rescue. His heart is likely smitten.
2.)Zipporah has very dark skin. In Numbers 12:1, Miriam and Aaron protest against Moses marrying a woman of color. The phrase used is "Cushite." Interestingly, God does not mention any displeasure with the inter-racial marriage, but rather he is deeply upset at the rebellion against Moses's authority by Aaron and Miriam.  Zipporah is a Cushite, Keturahite, and Midianite Arab (more on this later). With a little investigation into these families in the sacred text, we find a connection between "Cushite" and "dark skin." Keturah's son Jokshan has descendants named Sheba and Dedan (Ezekiel 27:15), who are merchants of ivory and ebony. In his book "God Loves the Arabs, Too," Dr. Louis Bahjat Hamada makes a compelling case: 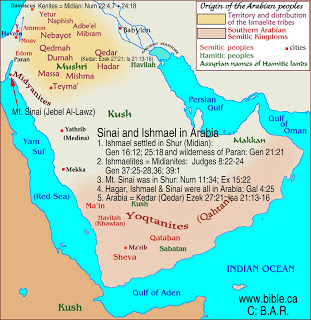 Cush was the oldest son of Ham, the son of Noah...He was the progenitor of the black race and the founder of Ethiopia. Ethiopia was known to the Greeks as Africa. The Cushites intermixed with other races and may have been semitized after they arrived in the Sudan. This may very well be the reason for the various shades of blackness that exist in the Near East. Jeremiah 13:23 seems to support these veiws: "Can the Ethiopian change his skin?"


Takeaways:
1) Arabs and Jews are cousins and often intermarry in the scriptures. (More on this later.) God is not against inter-racial marriage.
2) Arabs demonstrate a huge heart of generosity and loyalty to those they perceive as friends. This is still true today. Arabs will become significant in Israel's flight from Egypt and conquest of Palestine.
3) Although a sub-theme, God is working in and through Arabs throughout the scriptures. Many scholars believe that Job, Melchizedek, Jethro "priest of Midian," and the wise men were all Arabs.

To read more, visit the blog.

References:
1) Reuel meaning--For a meaning of the name Reuel, both NOBSE Study Bible Name List and Jones' Dictionary of Old Testament Proper Names read, Friend Of God. BDB Theological Dictionary does not offer a translation of this name, but does list it under the verb רעה (ra'a II).

3) Zipporah meaning--The name Zipporah may mean any of the above, but is most commonly interpreted to mean Bird (and so does NOBSE Study Bible Name List). Jones' Dictionary of Old Testament Proper Names reads the more distinctive Little Bird, possibly to indicate that Zipporah doesn't necessarily mean bird in the sense of eagle or ostrich.

Arabs in the Bible #1: Caleb is an Arab

Surprising Fact #1: Caleb is likely an Arab that God promises the land of Hebron.

1) Caleb is Ghalib in Arabic and means conqueror. It is very likely the mighty warrior, a friend of Joshua, and leader of the tribe of Judah, was an Arab. Because of his radical faith in God's promise to give Israel the promised land, he was given a place of leadership over Judah and the land of Hebron.

So that day Moses solemnly promised me, ‘The land of Canaan on which you were just walking will be your grant of land and that of your descendants forever, because you wholeheartedly followed the Lord my God.  (Joshua 14:6-15)

But my servant Caleb has a different attitude than the others have. He has remained loyal to me, so I will bring him into the land he explored. His descendants will possess their full share of that land. (Numbers 14:24)


2) Caleb is likely an Arab. He is the son of Jephunneh, a Kennizite from the tribe of Kenaz. (Numbers 13:6) The tribe of Kenaz came from Esau's Canaanite wife named Adah the daughter of Elon the Hittite (Gen. 36:2). Interestingly, Esau also married the daughter of his uncle Ishmael named Basemath (Gen. 36:3). Ishmael is considered to be the father of many Arab nations and believed by many Muslims to be in the genealogical line of their esteemed prophet Mohammed.

3) Caleb's nephew, Othniel became the first judge of Israel and marries Achsah the daughter of Caleb as a reward for driving out Cush-rishathaim, the king of Mesopotamia from the area of Hebron and Debir (12 miles southwest of Hebron). (Joshua 15:13-19)

Arabs in the Bible #2: Moses Married an Arab!